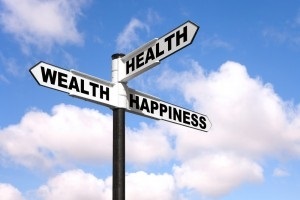 6 Things You Must Know About Money and Happiness

If you were offered a well-deserved raise at work or a no-strings-attached wad of money, would you take it? You’ve surely heard that money can’t buy happiness, but it can certainly get you closer to an enjoyable life, right?

Yes and no, says Elizabeth Dunn, Ph.D., associate professor of psychology at the University of British Columbia and author of Happy Money: The Science of Smarter Spending. “It turns out, what you do with your money seems to matter just as much to your happiness as how much you make,” she says; good news for those of us without a sudden windfall or promotion in our near futures.

Here are six facts that may surprise you—and tips on how to live the good life, no matter how much you’ve got.

“There is definitely a correlation between income and happiness,” says Dunn. “But actually, money buys less happiness than people assume.” And in some ways, it buys happiness only up to a certain point: A 2010 Princeton University study found that emotional well-being—defined by the frequency of emotions like joy, anger, affection, and sadness—tended to rise with salary, but only up to about $75,000. Beyond that, people continued to rate their lives as more satisfying, but they didn’t seem to experience any more happiness on a day-to-day basis.

Spend on experiences, not things

Material goods may last longer, but a 2014 San Francisco State University study shows that life experiences—like trips, fancy dinners, and spa treatments—provide more satisfaction in the long run. Researchers interviewed volunteers before and after they made purchases of both types, and found that afterward, most people viewed the intangibles as a better use of money. However, they add, an experience has to fit a person’s personality in order to have benefit; someone who doesn’t like show tunes, for example, probably won’t see the value in a Broadway play.

Giving to people or organizations in need “has a direct correlational effect on happiness that is basically equivalent to a doubling of household income,” says Dunn, citing research from a Gallup World Poll. How you give matters, too, she says: You’ll get more of an emotional reward by supporting groups you feel closely connected to, or when a close friend asks for your help. (In other words, accept that Ice Bucket Challenge already—the giving money part, at least!

Pay it off early

“The pleasure of consumption can be dragged down by the pain of having to pay for it,” says Dunn. One way to get around that? Put money down for things as early as you can, even if you won’t actually experience them for a while—book trips months in advance, pre-order books and albums you’re excited about, or purchase credit for a service you can redeem at a later date. “Research shows that what lies in the future is much more emotionally evocative than what lies in the past,” she adds. “If we paid for something last year, it’s almost like our brain forgets we ever spent money on it.”

When money gets tight, it may seem wasteful to splurge on presents and tokens of affection—but Dunn’s research shows that spending money on others, especially a loved one, is one of the happiest things you can do with your money. (In one study, people who had been asked to spend $5 on someone else felt better at the end of the day than those who’d been asked to spend it on themselves.) It’s the thought that counts, too: Both givers and receivers are happier when a gift is a good fit for the recipient’s personality.

Use a debit, not credit card

Being in debt is negatively associated with happiness, and is linked to health problems such as depression and anxiety. It may be hard to avoid all forms of debt, but one way to keep from falling deeper into it is to make everyday purchases with debit accounts, rather than charging them. “Debit cards are way happier plastic,” says Dunn. “They provide a lot of the same conveniences as credit cards, but don’t have the same long-term problems associated with them.”

This original article appeared on Health.com.

The opinions voiced in this material are for general information only and are not intended to provide specific advice or recommendations for any individual.